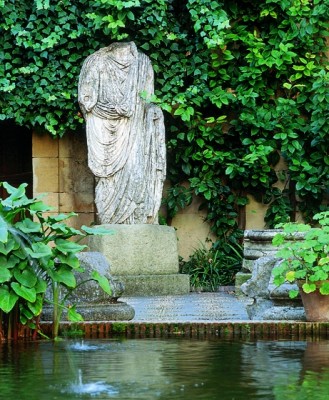 The Provincial Archaeological Museum is situated in the Plaza de Jerónimo Páez, in a building that was formerly a palace owned by the Páez de Castillejo, which possesses a noteworthy Bramantesquefaçade dating back to 1505.

The museum is considered to be the third most important in Spain.

The museum houses fascinating collections relating to the civilisations that have left their mark on the province over the course of history.

Indeed, the building displays the world’s most important collection of Moorish exhibits.

It is the third most important museum in Spain in terms of Roman sculpture and leads the field, or comes a close second, in terms of lead sarcophagi, Iberian, Neolithic, late-Roman and Visigoth exhibits and Roman mosaics and inscriptions, whilst in terms of ambience and harmony, it is undoubtedly the most beautiful museum in the country.

The architecture of its halls, patios and coffering, along with the series of fountains and decorative plants, combine to create an attractive setting that is unmistakably cordovan in nature.