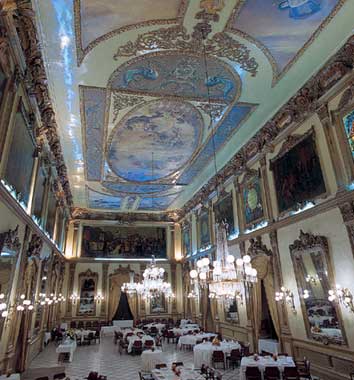 The Círculo de la Amistad [Circle of Friendship] was so named as in 1853, a typical institution amongst the nineteenth century bourgeoisie of Cordoba.

The Circle was a place of great cultural promotion, perhaps the greatest within the city until the arrival of democracy.

The building stands on the site of what was formerly a 15th century hospital and later a convent of Augustine nuns.

The building reflects the importance that the institution placed on arts and literary creation.

It boasts works by Mateo Inurria, the Fernández Alvarado brothers, who painted the decorative murals on the ceiling of the Salón Liceo, along with paintings by Rodríguez Losada, Julio Romero and Enrique Romero, and Díaz Huertas.