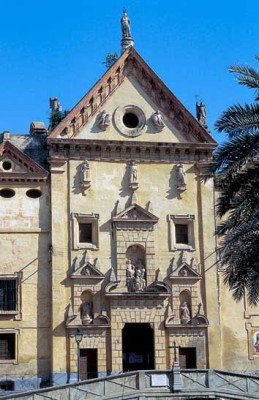 An ancient chapel, the chapel of Nuestra Señora de Gracia, stood close to the Puerta de Plasencia, and brother Juan Bautista de la Concepción, blessed of the Trinitarians, chose this area to establish the convent of the order: the temple was concluded in 1686, and particular attention should be drawn to the main façade, which was devised by Sebastian Vidal.

Directed towards the Plaza de los Olmos, now known as the Corazón de María, the church is a key feature of the Baroque Age in Cordoba.

The layout of the church is clearly pre-Baroque.

Its interior was built during the mid-17th century and its decoration is characteristic of the first quarter of 18th century.

The church houses a marvellous image of la Inmaculada, sculpted in 1668 by Pedro Roldán.

The main altarpiece of the church dates to the 18th century and is of Valencian workmanship.

The church also possesses the venerated image of Jesús Rescatado, sculpted by Fernando Díaz de Pacheco in 1713, and strongly influenced by montañesina tradition [from Santander].

A tombstone marks the resting place of the sculptor Gómez de Sandoval.