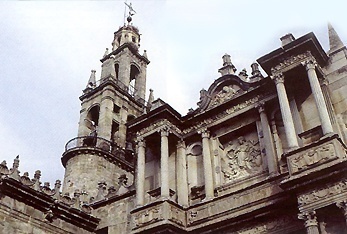 In the Plaza de la Catedral we find the parish church of San Juan Bautista, a magnificent Gothic-Renaissance temple dating back to between the 15th and 16th centuries.

The artistic importance of the temple has given rise to the popular name of “Catedral de la Sierra” [Cathedral of the Sierra].

Inside, the temple consists of three naves – the central nave is covered by a Mudejar coffered ceiling – separated by pointed arches that rest on pillars with adjoined columns.

In the apse of the temple, the ribbed ceiling of the main chapel bear special mention. The chapel is decorated with 18th century wall paintings that represent the celestial court, whilst at the base, a solid lowered arch sustains the choir stalls.

The most eye-catching features of the temple are found on the exterior, particularly on the epistle side, where the main facade takes the form of a triumphal arch.

The façade was begun by Hernán Ruiz I in 1539 and finished by his son in 1571, and is considered by Professor Rivas Carmona to be the pinnacle of Cordoba’s Renaissance”.

On the same side, next to the apse, the temple boasts three artistic windows with plateresque decoration, carried out by the first Hernán Ruiz, and displaying the coats of arms of the lords of Belalcázar, the patrons of the work.

From the base, a slender tower rises, dated from the end of the 16th century and attributed to Juan de Ochoa.

The treasury of the temple holds some notable pieces, such as a monstrance dating from the 16th to 17th centuries and a Rococo eucharistic urn.

In view of its artistic interest, this temple holds keeps regular visiting hours:from 9 am to 1 pm and from 4 pm to 8.30 pm.