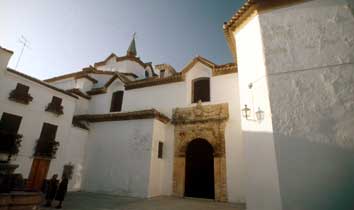 The parish church of la Asunción dates back to the 16th century.

The Renaissance facades and the single nave flanked by chapels also date from this period.

The church was remodelled in the 17th century, with the addition of the cross aisle, with lowered central cupola, and the tower.

The church is located in an exceptional area of the town which is visible from most parts of the surrounding area, and has thus become a symbol. The church is laid out in a Latin-cross plan with cross aisle and squared apse.

The main nave is divided into four sections with large lateral pilasters, separated by arch ribs, and covered with groined vaulting with lunettes at the base.

Considered as a whole, this is a building of beautiful proportions and elements of singular beauty.

Inside, it boasts examples of images from Granada, such as the Cristo de Ánimas by Alonso de Mena.