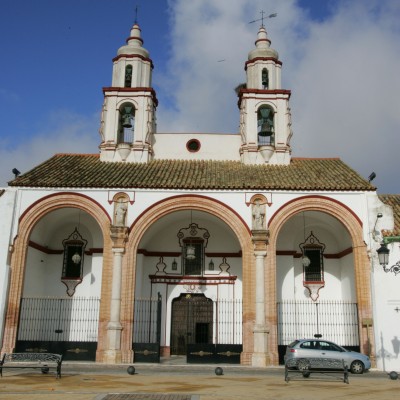 The Plaza de la Iglesia is dominated by the parish church of la Inmaculada Concepción, erected between 1769 and 1779, which J. Rivas attributes to the master craftsmen of nearby Ecija or its region.

It is a temple with three short naves separated by semi-circular arches that are supported by columns.

As with other temples of the New Towns, the best altarpieces and images come from Jesuit churches that Charles III ordered to be transferred when he expelled the order; A. Aroca attributes this origin to the three marble altars dedicated to la Dolorosa, la Virgen del Rosario and San José.

The raised altarpiece dates from the second half of the 18th century and was taken from the Cathedral of Cordoba.

The facade of the parish church is unlike that of any other temple: it is preceded by an open portico with three brickwork arches, whilst twin towers made with the same materials emerge from the roof.