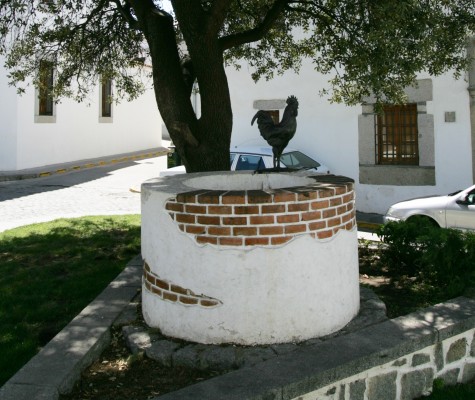 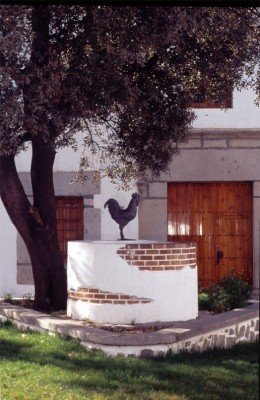 We find ourselves in the oldest part of the city, which, according to the legend, represents the origin of Pozoblanco.

Hard facts relating to the birth of the town do not exist, although, one of the most accepted versions informs us that at the beginning of the 14th century, a group of shepherds established themselves in this area.

The abundance of pastures and the privileged location led them to construct cabins in the area surrounding the “arroyo de las Casas” [a stream], close to a well [pozo].

Another version, which appears to have a more questionable factual basis, refers to the plague epidemic that occurred in approximately 1345 in the village of Pedroche.

In order to escape the plague, the shepherds settled in this area, a peaceful place with good pastures and climate.

They built cabins around the hamlet referred to as the Caserío del Pozo Blanco.The coat of arms of the town is displayed in the square. The building bearing the coat of arms – which stands behind the old well and belongs to the Town Hall of Pozoblanco – is the headquarters of the peña flamenca [flamenco club] .

On the façade, attention should be drawn to the lintel that frames the door, which recalls the history of the Holy Inquisition, an institution that reached its height during the 16th and 17th centuries.

The Church gained great power and was supported by the Monarchic state.

In 1482 the Holy Court was established in the City of Cordoba and, in terms of power, it was on an equal footing with the Cathedral chapter and the bishop.Over the centuries its jurisdiction was increased, the point where, in the 16th century, it controlled the following territories: Jaén, Ecija and la Abadía de Alcalá la Real. The Holy Court was characterised by its excellent organisation and operation. What began as an exclusively religious institution, with time acquired political power.

The inquisitors were deemed authorities and essential referents for the monarchs. In the towns of the region, the Holy Office had commissioners who protected the Faith and controlled the population.

The commissioners were the delegates of the Inquisition, and its informers. To draw attention to their duty, they inscribed their rank and standing on the lintels of their houses, so that anyone who passed by the house would be aware of the occupation of the resident.

Such is the case with this lintel, which possesses a Moorish arch with the coats of arms of the Church and the Holy Inquisition: the crossed keys are crowned with an ecclesiastic biretta.