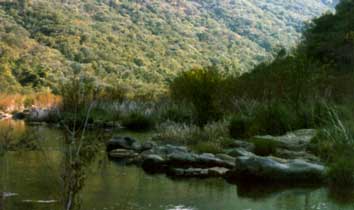 This area was declared a Nature Reserve in 1989.

It is located in the west of the province, and lies within the massif of Sierra Morena, the Dark Mountains, so called on account of the hue of this slate rich earth.

It is the  largest protected area in the Province of Cordoba and takes in sections of the municipal areas of Almodóvar del Río, Hornachuelos, Posadas, Villaviciosa de Cordoba and a small fringe of Cordoba capital.

The park is a mid-mountain Mediterranean ecosystem wherein the vegetation is dominated by the ilex and cork oaks.

The careful conservation of the plant masses has allowed animal species to develop, and particular attention should be drawn to the imperial eagle, the golden eagle, the Egyptian vulture, the goshawk, the sparrowhawk, and mammals such as the wolf, the lynx, the mongoose, the genet, the weasel and otters.

Currently, the Sierra de Hornachuelos houses the second most important colony of black vultures in Andalusia, along with three colonies of griffon vultures.

In addition, the numerous populations of deer and wild boar have enabled the Sierra de Hornachuelos to be considered as a primary hunting reserve at national level.

Roman remains close to Posadas, including tombstones and mosaics, along with Moorish towers, provide evidence of the different peoples who have occupied this area, although the population density of this region is the lowest in the entire province.

The reserve is accessed via the N-431 from Cordoba to Seville and is basically distributed amongst the municipal areas of Hornachuelos, Almodóvar del Río and Posadas.

The zone has plenty of accommodation and restaurants as well as a rich heritage.