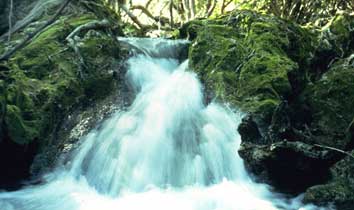 Sierra Subbética Nature Reserve refers to an area that was protected by the Junta de Andalucía [Regional Government of Andalusia] in 1988.

The reserve possesses a varied scenic beauty and is extremely important from an ecological point of view.

The sierra is largely made up of limestone, and the typical Karstic formations are one of the main attractions.

The land, amidst sharp drops and elevations, forms  beautiful narrow valleys. Sierra de Cabra bears special mention in this respect. Its highest peak, known as el Picacho, stands at a height of 1217 meters.

This zone is noted for the geological formations of lapiaz de los Lanchares, with its characteristic channels, very close to the chapel of Nuestra Señora de la Sierra and in the large depression of the polje de la Nava, in the same area.

Further north, close to the town of Zuheros we find the cueva de los Murciélago, wherein the walls are adorned with cave paintings.

The Nature Reserve boasts the highest peak in the Province of Cordoba: La Tiñosa, at 1570 metres.

Other mountains of great beauty include those of Rute and Horconera: the latter contains the peak of Bermejo, with an altitude of 1470 metres.

The water courses are scarce due to the high degree of filtration carried out by the mountains.

The vegetation is typically Mediterranean: rich in oak woodlands in the mountain areas, which, amongst others, are accompanied by hawthorn, spurge flax and jacaranda trees.

In the sunny spots and most open places in the mountains we find oak groves on the north-facing slopes with less sunshine and greater humidity, accompanied by scrubland with laurustuinus, Kermes oaks, evergreen buckthorns, common smilaxes and strawberry trees.

A spiny cushion of thicket grows over the highest areas of the sierra, consisting mainly of the following species: pirono azul, piorno fino, aliqueta, pendejo, which are not found anywhere else in the province.

The areas of scrubland are mainly inhabited by rabbits, foxes, common kestrels, whitethroats…

As the sierra possesses a wealth of limestone rock faces and outcrops, birds of prey are a typical sight, and include: the golden eagle, the griffon vulture and the peregrine falcon.

The population peregrine falcons is the largest in the entire province and the bird is the emblem of the reserve.

Attention must also be drawn to the mammals such as the mountain cat, wild boar, common fox and European hedgehog, whilst the most peculiar is Miller’s water shrew: the reserve contains one of the southernmost populations of this animal in Europe.

There are interesting varieties of reptile (the snub-nosed viper and ocellated lizard) crustaceans such as the European crab, amphibians such as the ribbed newt, the painted frog, meridion frog and salamander, amongst others, along with a wide variety of butterflies.

The Cordobilla and Malpasillo Nature Areas are located in the southern half of the province of Cordoba, along the river Genil, which runs between the provinces of Cordoba and Seville.

Malpasillo Reservoir is located in the municipal areas of Lucena in Cordoba and Badolatosa in Seville occupying an area of 313 hectares, 225 hectares of which are located in the province of Cordoba.

These two Protected Spaces are artificial wetlands, which nevertheless appear natural and offer beautiful scenery. The water from these Natural Areas comes from various sources: rainfall, surface runoff and rivers and streams.

The most important factor is the supply of water from the River Genil, from the snow melt in Sierra Nevada, regulated by Iznajar reservoir.

FLORA: As the reservoir is shallow, typical vegetation includes large swathes of cat’s tail and, to a lesser extent, irises and rushes.

FAUNA: The terrain is extremely diverse and favours a great number of species: The mallard, coloured duck, marbled duck and red shoveller; fish such as the barb, boga and royal carp. The pink flamingo and large cormorant are two of the most attractive winter visitors to these areas in recent years.

TOURIST ROUTES THROUGH THE PARK

LA VÍA VERDE [GREEN ROUTE]The Vía Verde runs along the railway line, which has been transformed into a route, known as the oil train, covering a total of 52 km and taking in the municipal areas of Lucena, Cabra, Doña Mencía, Zuheros and Luque.

The route has been designed for the enjoyment of residents, visitors and tourists, for activities such as trekking, cycling, horse-riding, etc, with a total prohibition on motor vehicles, thus representing an ideal space for the development of sporting and nature activities, within the framework of the development of sustainable tourism.

The route of la Vía Verde covers various points of interest such as: