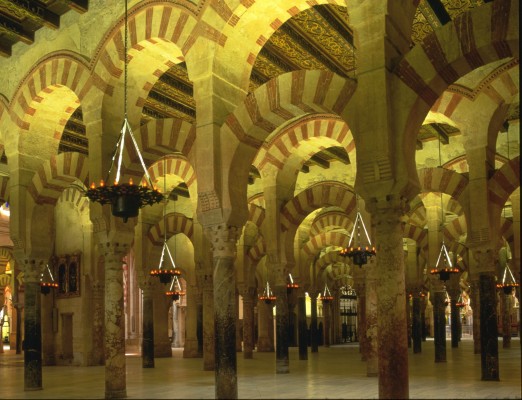 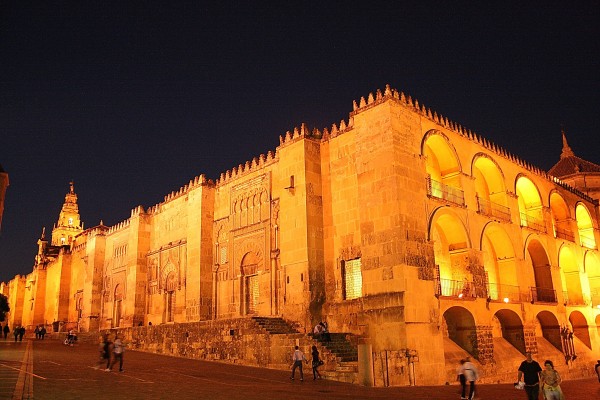 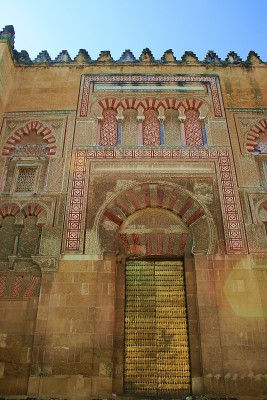 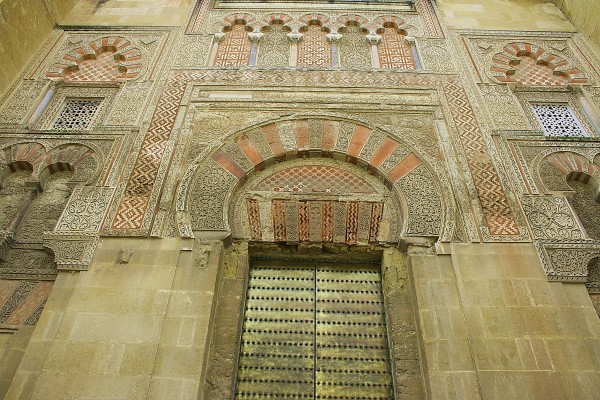 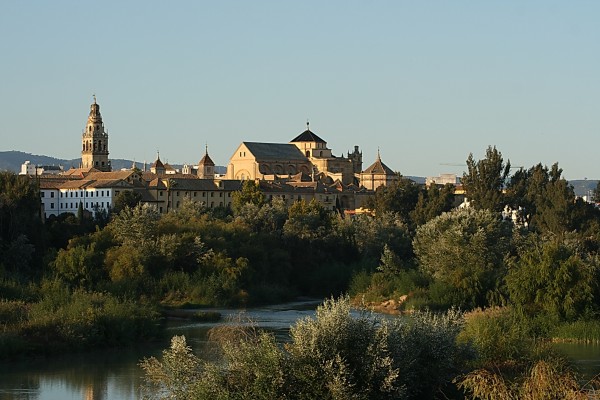 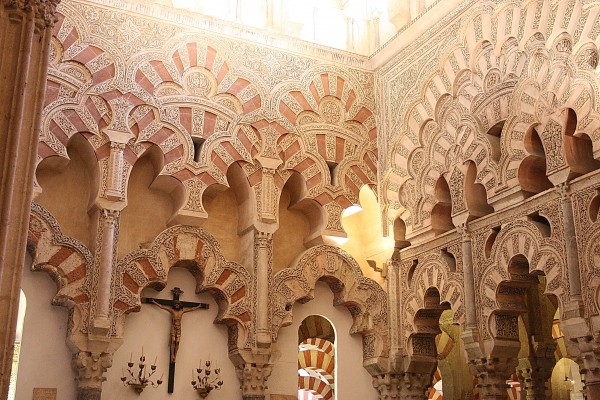 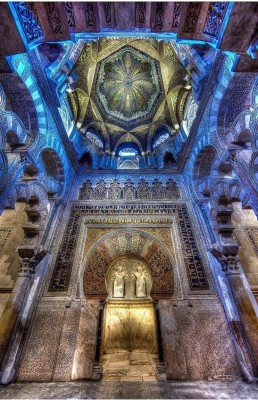 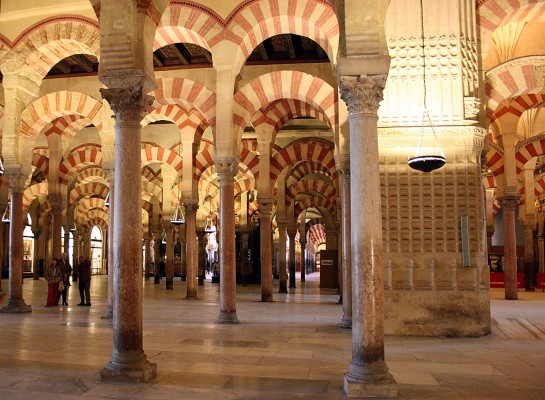 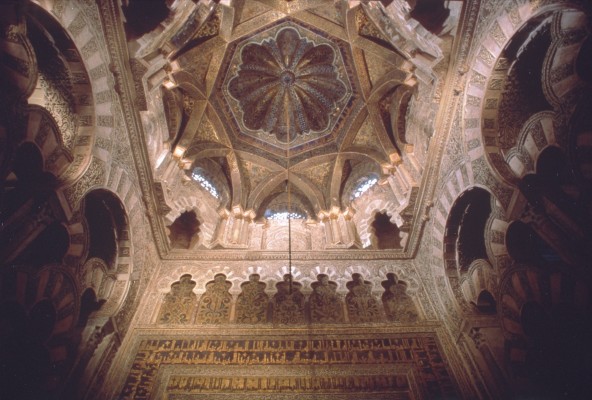 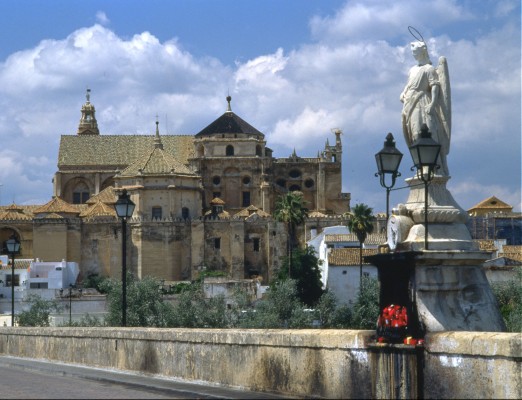 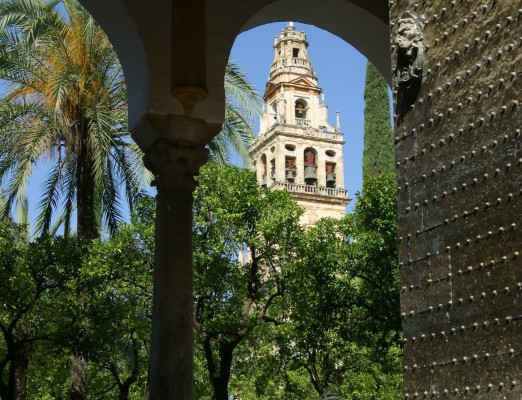 The Great Mosque -Aljama- of Cordoba, built during the period of Moorish occupation, is the most splendid Islamic monument in the western world.

Its construction commenced in 785, when Abd-ar-Rahman established Cordoba as capital of al-Andalus, on the site of an ancient church dedicated to San Vicente and was extended during successive periods by Abd-ar-Rahman II, Al-Hakam II and Almanzor.

The Mosque covers an area of 24,000m2 and its interior is an authentic “forest” of columns and arches, wherein the exceptional and admirable Mihrab, boasting inscriptions of the Koran in gold and rich mosaics, represents the focal point.

The Great Mosque is a harmonious combination of various different styles:the initial works of Abd-ar-Rahman I display Hispano-Visigothic influences, taking advantage of materials and columns gathered from other constructions.

The Mosque’s square ground plan is comprised of horseshoe arches supported on semi-circular arches that serve to provide greater elevation to the roof, resistance to the architectonic structure and facilitate lighting.

This era proved to be the most outstanding, and attention should be drawn to the coloured shafts, ornamental bases, along with the unsurpassed beauty of the coffered ceilings and the lobed and foiled arches.

Later, Almanzor, emulating his predecessors, further extended the Great Mosque, and concluded construction of the monument. Since 1523 the Great Mosque has also housed a Christian Cathedral, constructed in the wake of the Reconquest along with to other side chapels. Attention should be drawn to the impressive High Altarpiece, the Baroque Altarpiece, the choir stalls worked in mahogany and the Treasures of the Cathedral, consisting of priceless jewels, including the particularly noteworthy Monstrance of Arfe.

During the reign of Abd ar-Rahman II the Great Mosque was extended and the city entered a period of peace and prosperity. In response to the significant demographic growth of the city, in 833 eight additional arcades of arches were added, running in a southern direction, and, in order to maintain the unity of the complex, the qibla (the main wall of all mosques) was moved and the original Mihrab was demolished.

This extension proved extremely innovative as column bases were removed and magnificent capitals were added. Certain column shafts are extraordinary, particularly the two shafts resting on the columns marking the Mihrab.

In 961, the Caliph Al-Hakam II extended the Great Mosque further with an additional eleven arcades of arches that reach the new qibla and Mihrab.

In this case, the shafts were positioned in accordance with their colour scheme, whilst the columns, which do not possess ornamental bases, support capitals that alternate in the following manner: Corinthian capitals on blue marble shafts and capitals of an eclectic nature on pink marble shafts.

This section also presents an extremely beautiful coffered ceiling, and therefore, we can affirm that the area constructed at the behest of Al-Hakam II represents the highlight of the complex. The portico to this section takes the form of an enclosure referred to as the Capilla de Villaviciosa [Chapel of Villaviciosa]: it boasts lobed and foiled arches and a cupola with splendid stone ribs that form small vaults.

The Mihrab stands at the end of the extension ordered by Al-Hakam II, in the central pavilion. The cupola of the great hall of the Mihrab is an impressive octagonal structure with double columns in the angles supporting eight arches, which, as they cross, create the marvellous vault that is decorated with prodigious mosaics that display a rare perfection.

The harmonious façade of the Mihrab boasts a plinth of marble slabs, resting on four beautiful columns. All of the voussoirs, which decorate the spandrels of the arches, shine with Byzantine mosaics. Further beauty is added as the double mouldings of the arch panels extend into seven lobed arches that are supported on fine columns, transformed into the stylised plant motifs of the mosaic.

The interior of the Mihrab has an octagonal ground plan and maintains its original paving. The cupola of this holy area takes the form of a highly decorative stonework shell.

The extension carried out at the behest of Almanzor

In 987, during the reign of Hisham II, the prime minister, Almansor, ordered an extension to the Great Mosque, which involved the addition of almost a third of the entire complex.

Eight naves were augmented, wherein Corinthian and eclectic capitals are supported on marble columns that are alternately blue or violet in colour. A

fter Almanzor, the Great Mosque did not undergo further modifications during the period of Moorish occupation.