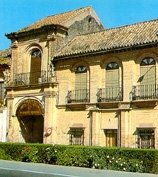 The Real Posada of La Carlota, also called Casa de Postas, was one of the first buildings erected in the town, functioning as an inn for wayfarers travelling along the Camino Real.

It dates back to the beginning of the colony, although it was extended a few decades later.

The architecture is noteworthy in view of its large dimensions, and the building is divided into twp main sections: the left wing,which housed the old guest house (18th century) and the right wing, corresponding to the posada [inn] (late 18th century and early 19th century).